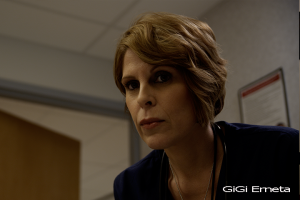 GiGi Erneta, born in NY to Argentinean parents, began performing professionally at age 8. In addition to acting, GiGi has directed, written and produced projects for ABC and NASA, and also wrote and produced her own film, COUNTERPLAY. After moving to Los Angeles, she devoted all her time to acting. She’s had several recurring roles on several TV shows, , including Veronica Mars, the CW show Desire and Spanish soap operas. She also guest starred on Friday Night Lights, Strong Medicine and many others. GiGi has credits in over 40 films. Most notably known for her role as Captain Judith Rainier in Flag of My Father and Jenny in Risen She studied at Playhouse West under the direction of Robert Carnegie and at the Second City Los Angeles. She also performed on The Second City stage with Martin Short, Fred Willard and Catherine O’Hara. Her athletic background has gifted her with stunt work, driving, fighting, and falling including a commercial for Buffalo Wild Wings where she dives over a bar in a suit. You might catch her hosting TV shows and on many national commercials. Her passion is getting the Gospel out through media to touch the secular world.