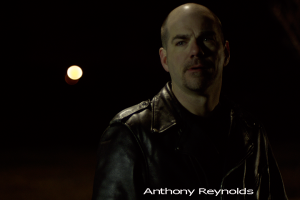 Anthony Reynolds is an American film, television and theatre actor known for his work as a character actor playing authoritative roles as law enforcement officers, federal agents and military officials. Gravitating toward the character actors in the movies of his childhood, Anthony aspired to be a regular guy who plays to the leads in supporting roles. Upon completion of Cary High School in 1986, Anthony studied at North Carolina State University and East Carolina University and made almost annual trips to New York to visit the theatre and museums. His college years were interrupted by some harrowing twists and turns, but Anthony graduated from ECU in 1992 with a BFA in Communication Arts. In 1993, he drove with a friend to Los Angeles where he slept on the floor of his high school friend, Keith Coulouris’ apartment in Studio City, CA. Keith was instrumental in Anthony getting a bit part in, Dead Man’s Revenge (1994), a USA network movie of the week, starring Bruce Dern, Michael Ironside and Vondie Curtis-Hall. Upon realizing the high cost of living in LA, Anthony returned to the East Coast to study acting as he had no business on a film set without formal training. He spent just shy of two years in Atlanta, taking classes and auditioning, before his then agent, Ted Borden urged him to make the big move to Manhattan to study at The Lee Strasberg Theatre Institute. In 1995, Anthony did just that. He lived in a NYU dorm with a student he met on his flight to New York after the living situation he had arranged prior to the move fell apart upon his arrival. The front door to the apartment that he was to be staying in had been kicked in and the tenants robbed the night before. He ended up bouncing between apartments on the Upper East and West Sides of the city. Concurrent to his studies at the LSTI, Anthony studied privately with acting coaches Michael Margotta and Geoffrey Horne. While performing off-off Broadway in numerous black box theaters, Anthony met Lamya Jezek. In 1999, upon her graduation from NYU’s Tisch School for Acting, the newly engaged couple moved to Los Angeles as Lamya had secured representation. They were married July 14, 2001, in North Carolina. In LA, Anthony studied with Milton Katselas at The Beverly Hills Playhouse and with Lesly Kahn in the Hollywood Hills. Anthony found that the best training of all, was working on sets with other actors. He had the privilege of working with Academy Award Nominated actor, Edward Norton for nine years on several films as well as Academy Award and Golden Globe Winner, Billy Bob Thornton on four films. Anthony maintains a number of relationships in NY and LA, but chose to return to his Southern roots to raise his family. Anthony and his family have resided on the East Coast since 2008, where he continues to work regularly in film and television.